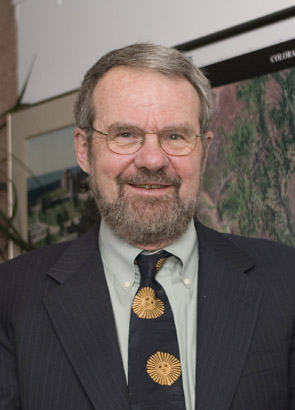 Richard A. Anthes, president emeritus of UCAR, is a highly regarded atmospheric scientist, author, educator, and administrator. He has won a number of awards from the American Meteorological Society (AMS), including the Clarence L. Meisinger and the Jule G. Charney Awards. In October 2003 he received the prestigious Friendship Award by the Chinese government. The Friendship Award is the highest award China bestows on foreigners (one out of a thousand nominations are selected), and he was the first atmospheric scientist to receive this honor. In 2007 Anthes served as president of the AMS. In 2015 he was presented the highest award of the AMS, Honorary Membership.

Anthes developed the first successful three-dimensional numerical model of the hurricane and was the father of one of the world's most widely used mesoscale models, the Penn State-NCAR mesoscale model, now in its fifth generation (MM5). In recent years he has become interested in the radio occultation technique for sounding Earth's atmosphere and was a key player in the highly successful proof-of-concept GPS/MET experiment and the Constellation Observing System for Meteorology Ionosphere and Climate (COSMIC), a joint Taiwan and U.S. project which successfully launched six satellites on April 15, 2006. Anthes has published over 100 peer-reviewed articles and books.

My research plans for the next few years is relatively straightforward—work with younger scientists on the applications of radio occultation (RO) soundings in the stratosphere and troposphere on topics in climate and weather. The COSMIC (Constellation Observing System for Meteorology, Ionosphere and Climate), which was launched in 2006 with an expected lifetime of five years, is slowly degrading, but continues to produce approximately 1,000 high-quality soundings per day.  A follow-on mission, COSMIC-2, will consist of two 6-satellite constellations, one in Equatorial orbit and producing 5,000 soundings per day between 30°N and 30°S; and the other in polar orbit, producing another 5,000 soundings globally.

Specific areas of research will include the use of RO soundings to study the atmospheric boundary layer, tropical cyclones, and how the RO soundings improve the accuracy of numerical weather prediction models.