The Sun, the Moon, and us: A guide to the Great American Eclipse of 2017

A solar eclipse occurs when the Moon passes between the Sun and Earth, causing the Moon to block the light from the Sun. Typically the Moon only partially blocks the Sun’s light during an eclipse, however occasionally the Moon completely blocks the Sun, causing what is called a total solar eclipse. August 21, 2017, will be just one of those occasions: the first in the continental United States since 1979. For many people across the U.S. who are under the "path of totality," day will turn to night for two minutes during this time and the Sun’s enigmatic faint extended atmosphere, or “corona,” will shine in the dark sky. Learn about this unique event: How it happens, where to view it, how to view it safely, and what you can expect from it! 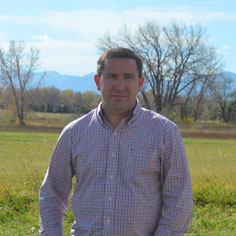 Scott McIntosh achieved a first-class honors degree in mathematics and physics and Ph.D. in astrophysics at the University of Glasgow. He was an High Altitude Observatory postdoctoral fellow in NCAR’s Advanced Study Program from 1999 to 2001. In 2001 McIntosh left NCAR to work with the European Space Agency as an external fellow at NASA's Goddard Space Flight Center (GSFC). After a brief spell working for the Universities Space Research Association in the "Living With A Star" program at GSFC, McIntosh returned to Boulder to work at the Southwest Research Institute. In 2007 Scott returned to HAO as a project scientist, becoming a ladder-track scientist in August 2009. His last appointment was as a scientist III and section head of HAO's Space Weather and Solar Transients research group. Scott’s primary field of research lies in the understanding of how magnetism, mass, and energy are transported from the Sun's convective interior to shape and fill the solar system in which we live.