Peering into the storms with weather radars - Past, Present and Future

Find out what’s going on inside high-impact and severe storms! NCAR Scientist Wen-Chau Lee is known for peering into these dangerous storms using weather radars. To probe inside the most violent storms on Earth, weather radars have been placed on the ground, mounted on trucks and ships, flown on aircraft and sent into space on satellites. Scientists have devised ways to observe and reveal storm structures in order to advance the knowledge and forecast of high-impact weather events. This has led to improved weather forecasts and public warnings to better protect life and property. In this talk, Lee reviews the history and advancement of weather radars and discusses how internal structures, microphysical characteristics, and rainfall from these storms can be revealed by weather radars.  Learn about what the future might hold for radar observations as a tool for scientific research and weather observations. 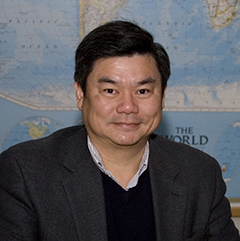 Wen-Chau Lee is a Senior Scientist and the Facility Manager of the Remote Sensing Facility/Earth Observing Laboratory (EOL) at NCAR. In this capacity, Lee investigates internal airflow structures of high impact weather events using Doppler weather radars, and is the lead scientist for the development of the next generation Airborne Phased Array polarimetric Doppler Radar (APAR) at NCAR.

Over the past 34 years working at NCAR, Lee’s work has contributed to new insights toward understanding the unique types and features of severe weather including tornadoes, bow echos, and hurricanes. As the lead scientist of the National Science Foundation (NSF)/NCAR Electra Doppler Radar (ELDORA) airborne Doppler radar, Lee guided a US Navy NRL-P3 to fly into two Category 5 Hurricanes (Katrina and Rita) in 2005 and collected unprecedented data to advance the knowledge of hurricane rainbands and storm rapid intensification processes. Lee holds two US patents for a single Doppler wind retrieval algorithm, called the velocity track display (VTD) technique, to deduce the tangential winds and the central pressure of landfalling hurricanes using real time data from single coastal Doppler radar. These insights help the hurricane specialists at the US National Hurricane Center to make better forecasts and issue public warnings.

Lee obtained his M.S. and Ph.D. in Atmospheric Sciences from the University of California, at Los Angeles, in 1985 and 1988, and received a B.S. from National Taiwan University in 1981.