Keeping an eye on the sun's magnetism

To the human eye, the Sun appears as a ball of light suspended in the daytime sky. In spite of its deceiving stillness, a closer look shows us that the Sun's atmosphere is alive and riddled with activity. Every second of every minute, strong winds emanating from the Sun's surface relentlessly buffet the interplanetary medium. Occasionally, the Sun brews large storms that expel vast amounts of hot material and radiation into space. All of this activity, known as Space Weather, puts our increasingly vulnerable technological society at risk.

Space weather is driven by the Sun's magnetism; invisible yet powerful magnetic forces, created within the Sun itself, determine when and where the next solar storm is going to happen.

Thanks to the magnifying power of telescopes, we are able to monitor the Sun in a lot more detail than ever before. By analyzing the light captured by telescopes and the instruments that furnish them, we are now able to quantify these magnetic forces and track their evolution in time. Major efforts are being put into trying to forecast how these forces evolve and whether or not they will trigger the next big solar eruption. 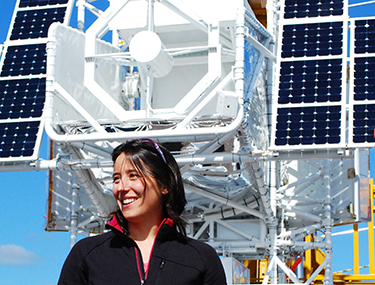 Rebecca Centeno is an Astrophysicist and Solar Physicist at the High Altitude Observatory (HAO) division of NCAR. She received her PhD in Solar Physics from La Laguna University and the Astrophysical Institute of the Canary Islands (Spain) in December 2006. Centeno has been at NCAR since 2007.

Centeno's scientific background is in the field of solar spectropolarimetry, this is, the measurement of the intensity and polarization of light that comes from the sun as a function of frequency. This is a powerful tool for remote sensing of magnetic fields in the Sun's atmosphere. These magnetic forces - and other physical properties - cannot be measured directly; instead, they are inferred from the signatures they imprint on the light that arrives to our telescopes from the Sun.

Although trained in ground-based telescopes around the world, in 2010 Centeno went on to become a team member for one of the instruments on NASA's Solar Dynamics Observatory satellite. This was followed by her (still ongoing) work on the Japanese/UK/US mission Hinode. In 2013 she participated in the launch and operations of the balloon-borne solar observatory Sunrise, a joint mission led by the Max Plank Institute for Solar System Research (Germany).

Since 2012, Centeno leads the Community Spectropolarimetric Analysis Center. This is an HAO/NCAR strategic initiative to develop, maintain and compile tools for the calibration and interpretation of solar polarization observations. This effort strives to produce high-level data that are ready for consumption by the scientific community. The education of the new generations of solar physicists is also an important component of this effort.

Centeno loves nature and enjoys spending time outdoors. Drawing, sourdough baking, and beekeeping are other passions that she pursues when she's not studying the Sun.